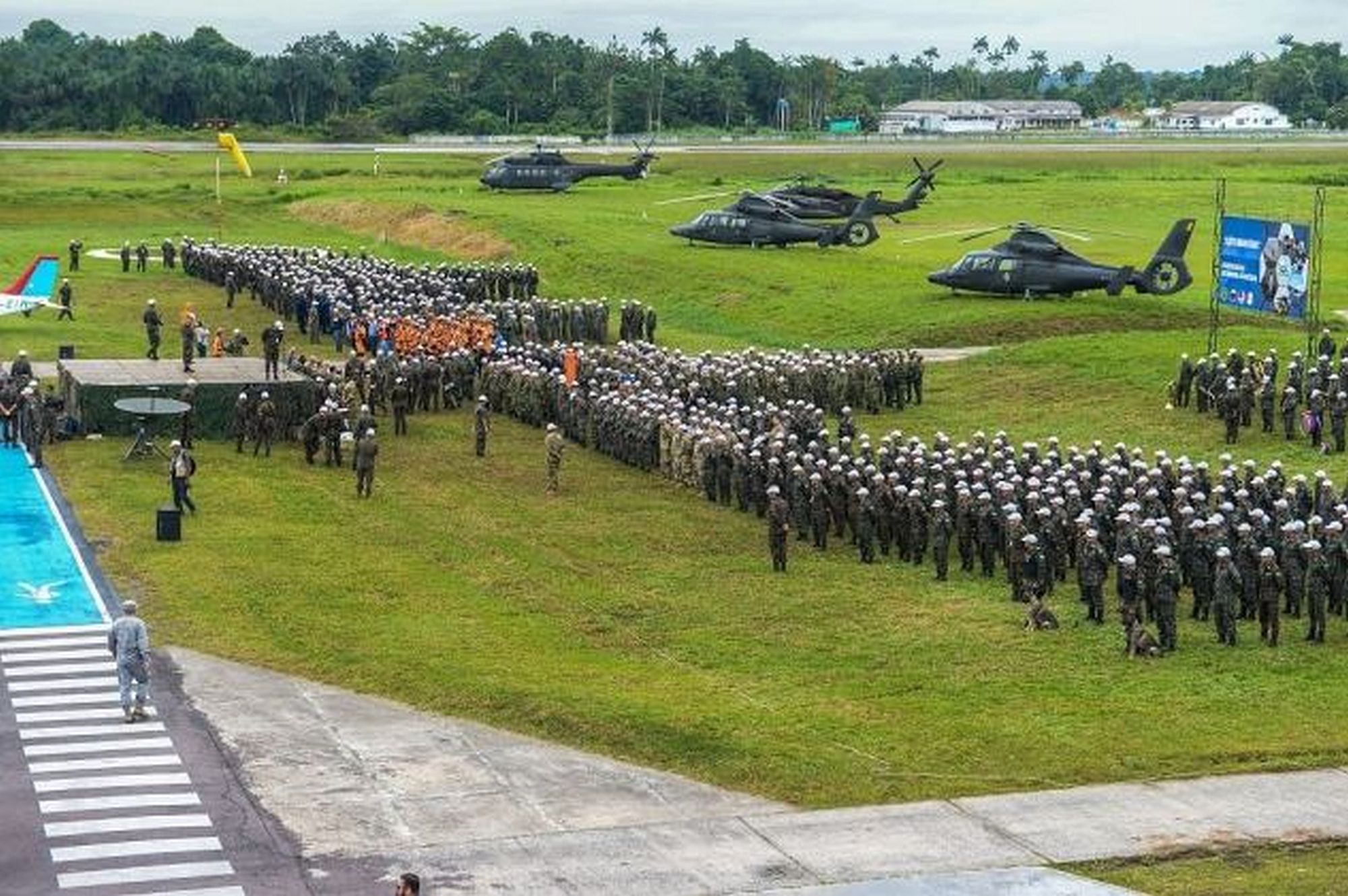 The city of Tabatinga, located nearly 1,000 kilometers from Manaus, set the stage for AMAZONLOG17, a Brazilian Army exercise held November 6th–13th, 2017. The objective of the exercise: to establish a protocol for coordinated military and civilian operations to provide humanitarian aid to people in disaster situations.

The refugee response simulation counted with 150 participants from countries of the tri-border, and the supervision of the United Nations High Commissioner for Refugees.

According to General Guilherme Cals Theophilo Gaspar de Oliveira, the Army’s logistics commander, the idea came from a need identified while the Brazilian Armed Forces participated in the peacekeeping mission in Haiti.

Tabatinga was not chosen randomly, Gen. Theophilo said. With little more than 60,000 residents, the city captures all the challenges of accessing the Amazon region.

“Worn out resources, lack of electricity, communications, and internet were all taken into consideration during the exercise. Lessons learned through the exercise were sorted out and will be compiled in a doctrine that we’ll take to the Organization of American States to be turned into a rapid response team for any disaster situation in any of the member nations,” Gen. Theophilo said.

“The exercise strengthened the Brazilian government’s presence in the region and involved public agencies to seek solutions to the problems the civilian population faces,” Major General Antônio Manoel de Barros, chairman of the Joint Chiefs of Staff for AMAZONLOG17, said.

The exercise exceeded expectations, he said, noting the benefits of the integration between civilian and military institutions of participating nations. “We managed to carry out important operations in a hard-to-access region. That demonstrated our capacity for logistics mobilization,” Maj. Gen. Barros said.

The exercise simulated a multinational logistics base for humanitarian aid operations, with training opportunities that involved logistics, maintenance, supply, evacuation, and engineering, as well as medical care for the population.

The Brazilian Air Force and Navy also participated in the exercise, as well as civil agencies such as the Federal Police, the Brazilian Institute for the Environment, and the National Indian Foundation.

During the exercises, Brazil mobilized 15 aircraft and 40 vessels. The United States contributed with one aircraft, and Colombia had three.

AMAZONLOG17 offered seminars and symposiums as well as mock exercises, such as responding to a river accident or running the Evacuee Control Center (CCE, per its Portuguese acronym). Close to 6,000 medical and dental services were provided in eight different regions.

The Brazilian Army conducted a simulated CCE to welcome refugees seeking shelter in the Brazilian city. According to Maj. Gen. Barros, the training sought to prepare armed forces on how to receive people moving from one place to another, while fleeing a crisis situation.

“The refugee problem happens often in the world, and we are not exempt from this in Brazil,” Maj. Gen. Barros said.

CCE followed international standards and protocols under the supervision of the United Nations High Commissioner for Refugees. The Brazilian Armed Forces’ responsibility, according to Maj. Gen. Barros, was to set up the structure for the CCE and provide support for civil agencies to work in concert.

“The training involved reception and registration, medical care and meals, with integration between military and civil sectors. The Control Center is another example of the importance of partnerships in the search for solutions to complex problems. This concept was present throughout AMAZONLOG and was reinforced in the CCE training,” he said.

According to Maj. Gen. Barros, the operation was positive for the local population. Preparations for the exercise created more than 200 temporary jobs and enhanced the region’s infrastructure.

“The power grid was upgraded; more than one kilometer of new roadway was paved; and the region’s Basic Health Unit was reestablished and expanded,” Maj. Gen. Barros said.

The potential for a partnership with the municipality of Tabatinga is also under review to use the exercise camp as a leisure area for the local population, he added.

Maj. Gen. Barros highlighted integration between civil and military institutions in the interest of the Amazon region and its population as another benefit of the exercise. “AMAZONLOG17 even had a favorable effect on our Army operations in the tri-border area if we consider the strengthened relations with our partners Peru and Colombia,” he said.

“That cooperation already existed because we face the same issues, and we’re always ready to seek better solutions. But this exercise established more synchronized procedures,” he added.

Colombian Army Colonel Jorge Eduardo Cepeda Jimenez noted the exercise’s importance for interoperability among the tri-border nations. “We want to ensure that operational exercises are specific and directed at supporting communities that live so far away from the large population centers,” he said.

For Peruvian Army Major General Sérgio Arturo Bendezú Echevarria, AMAZONLOG will enable the establishment of a joint doctrine for crisis situations at the border.

The United States participated in AMAZONLOG17 as an active observer. The U.S. team, which included 55 military and civilian personnel, brought one C-130 plane to the exercise and shared past experience on responding to various disasters.

“During the Haiti earthquake, for example, when Brazil was there on the peacekeeping mission, the U.S. was the first to arrive,” Gen. Theophilo recalled.

The invitation to AMAZONLOG came from the Brazilian Army. “The objective was to add value to the exercise with the expertise that the Americans have with their vast experience in humanitarian aid throughout the world.

We came together based on current international agreements,” Maj. Gen. Barros said, adding that the United States contributed its knowledge and observed how Brazil, Peru, and Colombia operated.

“When you put different structures and personnel in place, with different real-world experiences, you get better results, and there’s cooperation,” he said.

For U.S. Marine Corps Colonel Williams Truax, who participated in the exercise, the ability to conduct joint operations efficiently and effectively is what many nations’ armed forces seek, particularly in humanitarian aid operations.

“Our participation has allowed us to learn more about these operational methods and techniques, especially those of the Brazilian Army’s General Staff.

“In the event of a natural disaster, this will help give us the capacity to conduct joint operations with the Brazilian Armed Forces wherever and whenever it’s needed,” Col. Truax said.

“Such interoperability makes a big difference during times of real need, particularly in the first hours of a natural disaster when every minute matters most,” he concluded.

More Sex, Please! We Are Brazilian

Everything you ever wanted to know about sex in Brazil and never was able ...

Brazil is the world’s murder capital. No other country even comes close. That is ...

An app that maps safe spaces for LGBT+ people and features a panic button ...

Brazilians took to the streets in a nationwide protest on Wednesday against President Michel ...

G20 Is Not a Total Disaster. Brazil Is an Inspiration for Work Against Poverty

A Brazilian Landless Movement’s Leader Talks About the MST’s Mistakes, Challenges and Plans

During the 1960s, legend has it that governor José Sarney sat down at a ...

The former President of Brazil and founder of the Workers Party, Luiz Inácio Lula ...