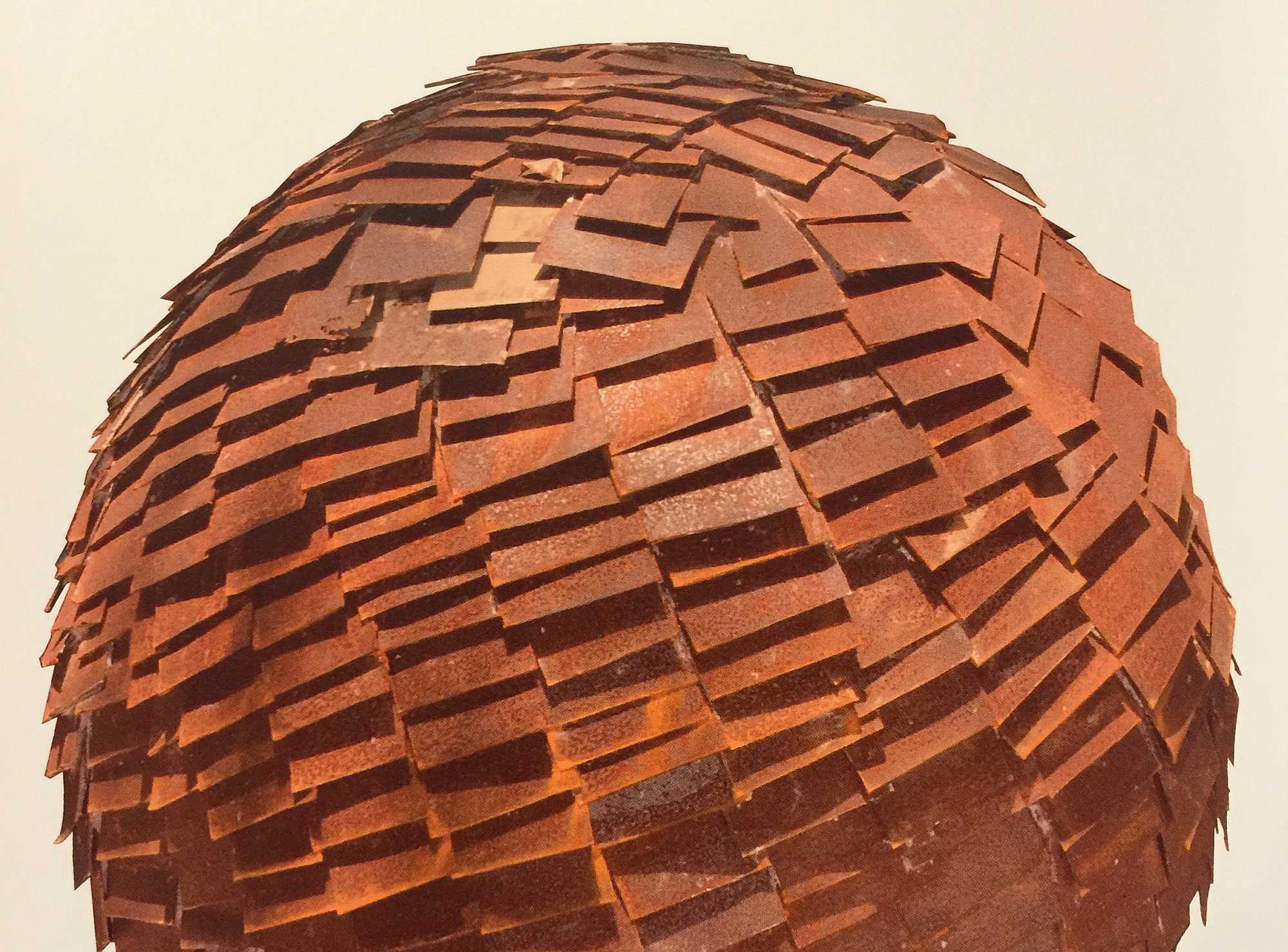 It is not just by chance that Renata Adler tries to appropriate in her work the formula of the renowned eighteenth-century French philosopher Lavoisier, who is also often said to be the father of modern chemistry: “Nothing is lost, everything is transformed.”

This is because one of Lavoisier’s most important research projects involved determining the nature of combustion or of rapid oxidation. What matters to Renata is precisely the energy in the reaction of matter.

In Renata’s sculptures made of iron or other materials, there is a provocation of the state of matter that contributes to chemical revolutions, sometimes technical, experimental or epistemological.

Without hesitation she typically uses unusual elements, such as coffee, adding another sensorial dimension. If in the artwork Mundos Entrelaçados (Interlaced Worlds) she chose not to interact with the materials used, allowing them to change without any interference, in Planetas (Planets) she painted delicate and colorful landscapes that will evolve over time.

There is a desire to speak of “impressions” even if her works are not impressionistic in the sense of the word. This is because, in addition to the dialogue between matter and painting, she also loves light, manifest in Planetas in which she discreetly placed LEDs lights behind the worked plates.

It draws heavily on a critique of Claude Monet’s work that read: “Claude painted what he saw. If he saw wind, he would put wind in his pictures.” She tries to introduce the cosmos.

It was precisely this work on the energy of matter that caught my attention when, in one of my habitual visits to artists’ studios, I discovered the works of this artist, who is now emerging with her first exhibition.

Renata has flirted with the art world from an early age. She has always loved painting and photography, and even developed her own photos, but she ended up becoming attracted to sculpture. The solar system has always fascinated her.

This is why the exhibition “The Path of the Planets” speaks of a life experience that transcends the present. I find it interesting how she emphasizes this: “My head seems to be in the stars, on the other hand, my feet are firmly stuck to the ground”.

The word cosmos comes from the Latin cosmos (world), which in turn comes from the ancient Greek kósmos (order, ordered), and by extension, the order of the Universe.

The planets, galaxies and stars of Renata’s works not only speak of everything that exists, but also try to propose a philosophy that evokes a Universe as a well-organized system.

At a time when new generations are hunched over with their eyes glued to screens, she would like to invite them to lift their heads and look up at the sky that many of us neglect. She wants to offer a voyage that links the Earth’s energies.

Getting inspiration from the way nature crafted the margins of a creek that ran near her childhood home, she tries to express through the living matter she uses in her works the little microcosms of Mankind in opposition to the macrocosms of the Universe.

“For me everything is a matter of energy and I constantly refer to ‘chakras’,” says Renata. “If today this word is better known to mean points where energy channels converge, this term in fact comes from Sanskrit and refers to disc-shaped objects, including the sun.

In the past, in India, these were metal discs, including gold, copper, or iron, materials I like to use. The main chakras are associated with color, and when I observe myself, green, symbol of a beating heart, air and mystery, is the first to appear. So rather unconsciously, I expose this umbilical cord in my work linking the life of Man to the mysteries of the Cosmos.”

Colors are very important to her. As Kandinsky said: “Colors are the keys, the eyes are the hammers and the soul is the piano with its strings.” Forms and colors are not the result of simple associations of arbitrary ideas, but of an interior experience that, in Renata’s abstract paintings, refers to the senses.

She usually works on previously drawn forms to which she adds colors, observing its subjective effect. She allows shapes and colors to interact in their own alchemy. Her intention is not to say that these are scientific or objective observations, but rather that they are totally subjective and purely phenomenological.

As Renata says, “Everything is a matter of transformation.” In Camaleões (Chameleons), she dares to evoke spontaneously “Anima and Animus” referred to by Carl Gustav Jung in his work “The Relations Between the Ego and the Unconscious.”

As an artist and as a woman, she speaks of her masculine side and of her pleasure when she has to come face to face with the physical demands of a sculptor’s work, even if her work, well rounded lathed woodwork highlighted by rings of painted color, is frankly feminine.

Underlying Renata’s works, however, are the transformations she likes to talk about, the connections between the Earth of Mankind and the Infinity of the Universe, wherein lie all the fundamental questions that we ask ourselves.

In a vast process of apparent disenchantment with a world where humanity is no longer at the center, nor the end, and not even a privileged species at the top of the evolutionary tree, what relations can we expect between Nature and Humanity?

Are we facing an absurd Universe, as Sartre’s existentialism proclaims, or is it perhaps necessary to wait for the end of a crisis of cosmic mutation that will give rise to a new and positive relationship between the Universe and Humanity?

And what if the end of our human illusions, so excessive, helps to reunite us with reality and establish an enriching relationship with nature and the immensity of the Cosmos?

For the first time and hopefully for many more we will be presented by her work in progress starting with the opening of two exhibitions in Rio de Janeiro called “The Path of the Planets”. The very first will take place at Hotel Santa Teresa Gallery M – August 17 to October 16, 2017, followed by Parque das Ruínas – September 2 to 25, 2017.

Marc Pottier is a French art curator. A former auctioneer and French cultural attaché in Brazil and Portugal, he has overseen art exhibitions around the world for over 20 years and helped develop The Garden of Light, an artist’s park in Jordan.

The Cantora: A Historical Novel About Brazil in the Early 1500s

“O Processo,” translated from Brazilian Portuguese as “The Trial,” is a new film about ...

An actress known for decades of work in soap operas said on Wednesday she ...

Brecht’s Legacy Lives on Brazilian Stage, Movies and Beyond

The significance of Bertolt Brecht’s groundbreaking theories from the twenties and thirties on the ...

The silliness occasionally threatens to get out of hand, but all in all A ...

Brazil Teaches that Museums Can Be Quite Ephemeral

On September 2, the National Museum of Brazil lit up Rio de Janeiro’s night ...

From a Lineage of Great Brazilian Artists, Daniela Soledade Gets Her Time in the Spotlight

Daniela Soledade may initially seem like a fresh name in Brazilian music, but the ...

Paulo Coelho’s latest book to be released in the US is neither a memorable ...

The São Paulo Museum of Modern Art (MAM) is housing the works of Brazilian ...