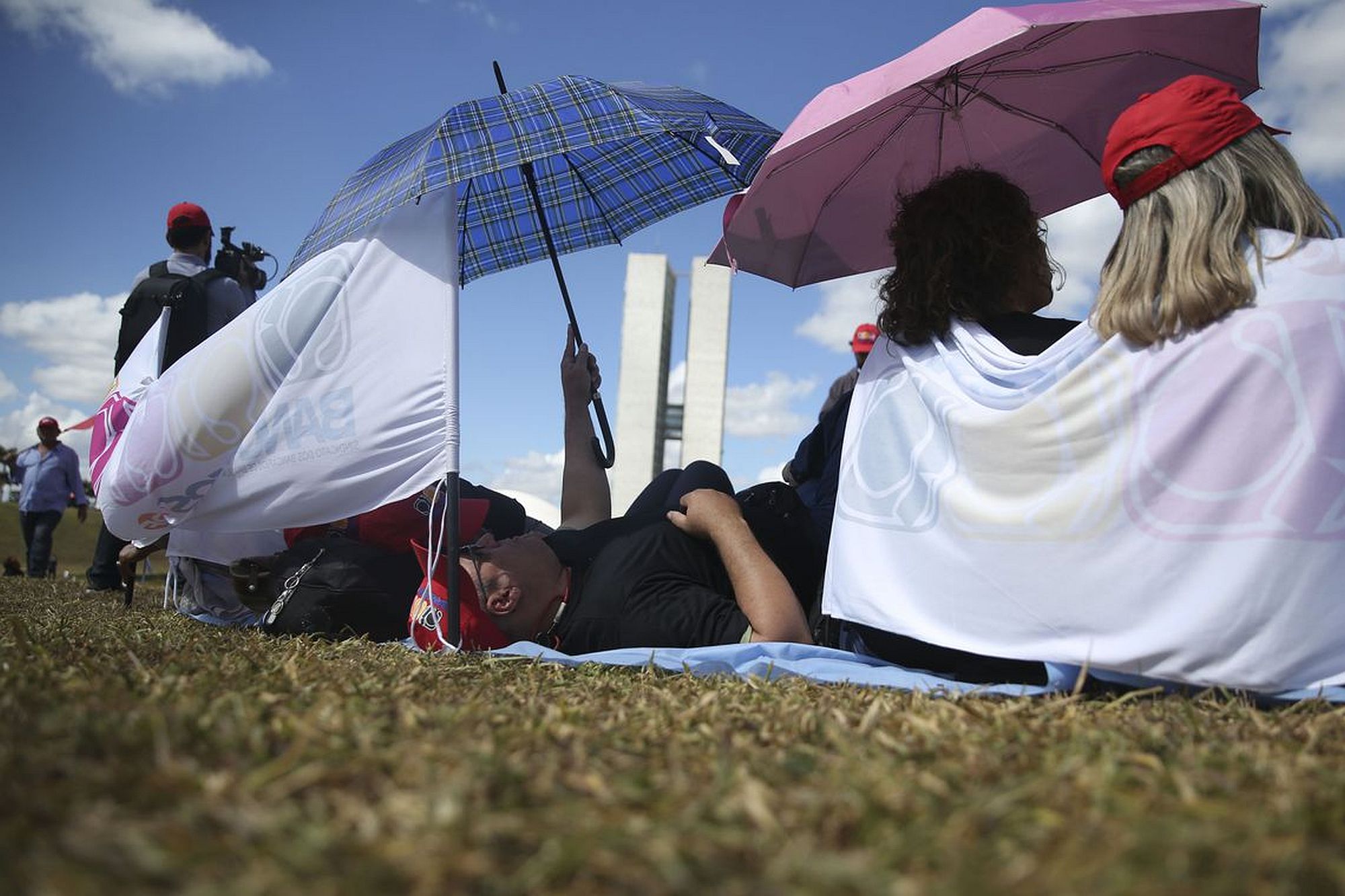 Protesters against the government in capital Brasília - José Cruz/ABr

Democracies are often rocked by wars and internal conflicts that brew up dissonance, clashes, and attacks on the republican rule of law. Venezuela’s steep fall into arbitrary rule and gut-wrenching poverty has sunk hopes of democratic rule.

The United States faces a democratic test under President Donald Trump, with Russia’s active efforts to warp the US electoral process and Trump’s efforts to undermine the rule of law challenging the institutional integrity of the judiciary and the legislature.

Brazilian democracy has also taken a beating of late.

The country responded to the 2009 recession with counter-cyclical policies that lessened the pain and protected the most vulnerable, but a perfect storm rumbled into Brasília in 2014, smashing the economy and undercutting the legitimacy of Brazilian democracy.

The onset of economic decline coincided with revelations from the Lava Jato corruption task force, which found that business leaders and politicians had conspired to siphon off procurement kickbacks to finance political parties and their candidates. The scope of the Lava Jato scheme was unprecedented, but the existence of campaign slush funds is old news in Brazil.

For three years, the recession and Lava Jato prosecutions led to recriminations that reached their climax with the 2016 impeachment of former president Dilma Rousseff and the incarceration of the Workers Party leader and former president Luiz Inácio Lula da Silva earlier this year.

Brazil’s New Republic, forged in the transition from military dictatorship to civilian rule during the 1980s, has always been fiery and fragmented.

The number of political parties and representative civil society organizations grows at a rate of knots. Elections are passionately contested. According to the Institute for Democracy and Electoral Assistance, during the past three decades turnout of the voting-age population has reached nearly 80 percent. Voting is compulsory, but the sanctions for abstention rarely dissuade citizens.

Most Brazilians want to vote. Invalid votes, both blank and incorrectly marked, normally comprise five to ten per cent of the total. In the first round of the 2014 elections invalid votes reached nearly ten per cent and nearly 20 per cent of the voting-age population failed to show up at the ballot box, giving an effective rate of abstention of nearly 30 per cent.

Brazil’s turnout for presidential elections ranks above average, and well above Mexico (63%) or the US (65%), but it could fall in 2018.

In recent polling for the 2018 elections, 43 percent of respondents planned to abstain or were undecided. Some will eventually cast a valid vote, but the second round of the presidential election may trigger a measurable jump in effective abstention, which would radically alter the electoral terrain.

Normally abstention rates drop during the second round, but this year’s contest may be different. The winning candidate may receive fewer votes than the number of Brazilians who effectively abstain. High levels of candidate disapproval could push second round abstention well beyond a third of the voting-age population.

According to the latest DataFolha poll, the leading candidates also face significant levels of voter rejection.

The conservative nationalist Jair Bolsonaro of the Social Liberal Party (PSL) ranks highest, with 39 per cent of respondents refusing to consider voting for him. Geraldo Alckmin of the Brazilian Social Democratic Party (PSDB) follows with 26 per cent, whereas Marina Silva (Rede) and Ciro Gomes of the Democratic Labor Party (PDT) trail with 25 and 23 per cent respectively.

The Workers Party candidate, former president Lula, is just behind Bolsonaro with 34 percent, but it is more likely that his running mate Fernando Haddad will become the eventual contender for the PT, since Lula’s conviction on corruption charges nullifies his candidacy under the country’s “clean slate” law. Haddad also registers comparable rejection by voters.

More interestingly, Poder 360 reports that when respondents know particular candidates, then rejection rates soar. For example, for those that know of Bolsonaro, 69 percent refuse to vote for him. Essentially, once voters get to know the leading candidates, rejection rates jump to the sixtieth percentile.

Bolsonaro leads the pack with roughly 20 per cent approval and will certainly qualify for the second-round on October 28, but his high disapproval rating may send many voters to the sidelines if they refuse to consider the second-place candidate. Haddad of the PT is another favorite to make it into the second round, but he faces a 57 per cent disapproval rating from those who know of him.

Brazil’s deepening polarization and sky-high candidate rejection levels make it increasingly plausible that many prospective second-round voters may decline to vote due to their rejection of both candidates.

Brazilians also question whether October’s elections will lead to better governance. The 1994 presidential campaign coincided with the introduction of the Real Plan that ended hyperinflation and led to a huge boost in the approval rating of its key proponent, Minister of Finance Fernando Henrique Cardoso.

The 2002 campaign saw the consummation of Lula’s “Letter to the Brazilian People”, which made it a policy principle that the federal government would meet the basic needs of every Brazilian.

This year’s presidential contenders promise a lot, but voters are increasingly suspicious of such pledges. Voters are disgusted with the body politic and distrust politicians and their parties.

In theory, October’s elections should bring much needed legitimacy to a federal government shaken by corruption scandals and presidential impeachment. However, recent DataFolha polling found that two-thirds of respondents have lost confidence in congress and political parties.

And though Brazilian voters will elect a new president in October, it appears that congressional incumbents still hold all the cards when it comes to re-election. Nearly 75 per cent of elections for the Chamber of Federal Deputies and Senate will include incumbent contenders.

There is, however, a movement underway asking voter to commit to voting for non-politicians and new candidates. Both the newly established political party Partido Novo and the social movement RenovaBR have promised to elect a set of new faces, but they are up against entrenched incumbency and well-established party machines.

Ironically, the Lava Jato corruption scandal and its links to major Brazilian enterprises such as Odebrecht has led to the enactment of a ban on all corporate campaign donations.

While this might sound positive, the measure may actually assist wealthy Brazilian candidates willing to spend their own money while newcomers scramble to raise funds. Since incumbents also tend to be wealthy by Brazilian standards, this also favors incumbency.

Elections matter, but will enough new faces be elected to push the new congress toward greater political reforms that deepen accountability and transparency to achieve legitimacy in the eyes of weary Brazilians?

National leaders need legitimacy to govern under democratic rule. Legitimacy is gained at the ballot box, but it must also be tempered through good governance and results-oriented policymaking in the long term. Brazilian leaders are adept at fixing short-term political snags, but governability – the capacity to control and manage a given society – has sagged in recent years.

Congress as well as state and local governments throughout Brazil have struggled to legislate and ensure fiscal responsibility amidst a growing demand for better public services. Gradual improvements in public services, most notably health and security, have ground to a halt.

The recent explosion of homicides and violence is the bloody expression of failed governance, and it’s dark stain has tainted Brazil’s leading political parties. No one is innocent in Brasília.

Elections do not necessarily improve governability, even if they lend legitimacy to elected leaders. The next Brazilian president may struggle with congressional cooperation. Parties and parliaments serve to aggregate private interests into public policy and law, but with nearly 30 parties – most with little ideological coherence or discipline – the Brazilian congress cannot do this effectively, making good governance a distant dream. The country’s high level of electoral contestation is impressive, but the political debts incurred in successful election campaigns can also undermine governability.

There are thirteen candidates vying for the presidential sash, many of whom share similar ideologies and policy approaches. The first round of the presidential election is hotly contested, with four or five contenders holding a possible ticket to the second round. On average, there are over 16 candidates for each seat in the lower house, with the states of Rio de Janeiro and São Paulo having nearly 24 candidates per race.

Contestation legitimizes democracy, but it can also divide and fragment the body politic, challenging institutional mechanisms of interest aggregation (such as parties and legislative negotiations).

With so many parties and candidates vying for the spoils of victory, yet confused over how to broker alliances and trade votes, governability is weakened. In this way, contestation can blind elected officials to the real task at hand.

Worse, the challenge of the legislative process coupled with high levels of contestation has led to multiple corruption schemes for buying congressional votes and electing allies. The Lava Jato scheme is just the latest iteration of efforts to finance electoral campaigns.

With so much competition and participation, Brazilian candidates are hard-pressed to win an election without making illicit payments to gatekeepers – usually local politicians and their activist supporters – in order to gain access to organized constituencies: professional associations, labor unions, or community groups, for instance.

The elections of October 2018 are just the first step along a thornier path towards a more accountable and representative democracy. Brazilian majorities will elect their president and governors, but only small pluralities will directly elect their representatives in congress and state assemblies under the current proportional system.

The first order of business for the next congress should be to openly debate the democratic deficits that lead to corruption, ineffective governance, and deteriorating public services. More likely than not, most elected officials will dodge this democratic mandate.

Brazilian citizens will need to come together in non-partisan, independent collective action to push the country’s wounded democracy towards higher ground. Otherwise, the New Republic could well go under.

Mark S. Langevin, Ph.D., is Senior Fellow at the Schar School of Policy and Government, George Mason University, and Director of Brazilworks. He can be reached at mark@brazilworks.net

This article appeared originally in the LSE site – http://blogs.lse.ac.uk/latamcaribbean/

Brazil: Any New President Will Inevitably Disappoint a Polarized Population

The worst environmental tragedy in Brazil’s history occurred on the fifth of November, 2015. ...

Volkswagen Says It Cooperated with Brazil Dictatorship Allowing Torture. No Apologies, No Compensation

A study commissioned by Volkswagen has found that some staff at the German carmaker ...

Brazil gained one position in the ranking of world economies. In the opinion of ...

Brazil’s Senate President Renan Calheiros said that he will meet with party leaders next ...

2018, a Year of Elections and Populism in Brazil and Latin America

After Defeat in the Supreme, Lula’s Backers Announce: “Waltz Is over, Now It’s War”

Social leaders and politicians across Brazil and the world are voicing their discontent with ...

Officials in northern Brazil are demanding federal aid to help manage the influx of ...