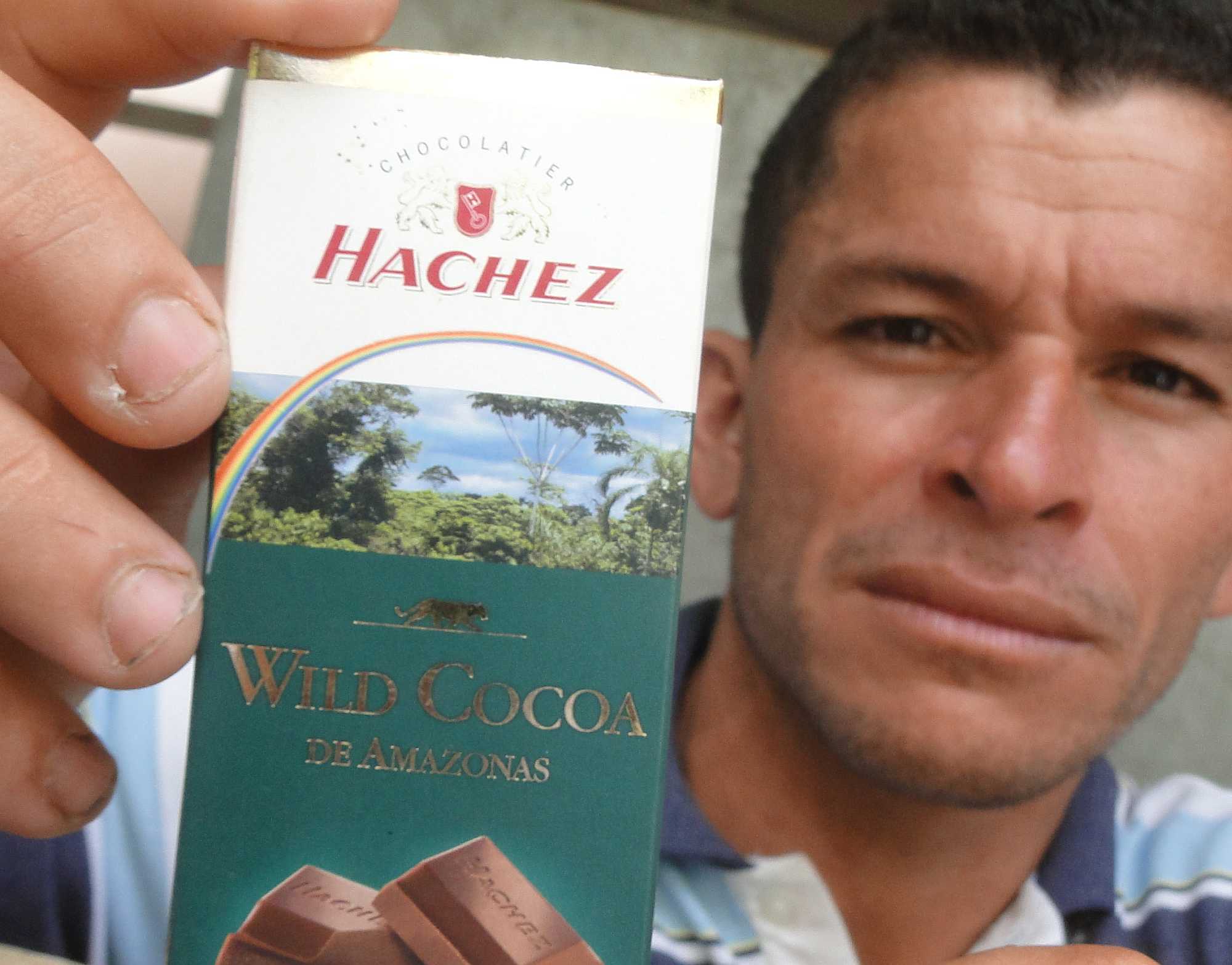 With a cigarette in one hand and a muddy machete in the other, Brazilian grandmother Maria Nobre de Oliveira thinks high-end chocolate will help end the epidemic of deforestation ravaging Amazon communities like hers.

Her community of a few dozen residents live in hand-built wooden houses with no electricity or running water in the world’s largest rainforest, more than six hours by river boat from the nearest town in Brazil’s southwestern Amazonas State.

Residents in isolated Amazon settlements say they have few opportunities to make a living other than clearing land to raise cattle – part of the reason why Amazon deforestation rates in Brazil shot up 29 percent last year after years of decline.

As well as villagers clearing land to feed themselves, large ranchers and speculators have been trying to invade the Arapixi nature reserve where Oliveira lives to cut down trees, an official with Brazil’s environment ministry said.

But residents of the reserve have new ally to help them protect the trees – chocolate.

“This is virgin forest,” Oliveira, 62, told as residents used long poles to knock cocoa beans – the base ingredient for chocolate – from the reserve’s trees.

“Some guys came to cut the trees down a while back – but we told them to get lost,” Oliveira said, as other farmers carried fresh cocoa beans to dry in the sun.

“If we had let them, we wouldn’t have an income source… cocoa helps us protect the forest.” Farmers in the nature reserve work with a local cooperative in Boca do Acre that manages the sale and export of the cocoa.

Finding a balance between employment for local people and protecting Amazonian forests has long stumped policymakers.

Every minute, forests larger than two football fields are felled in the Amazon, according to the former director of Brazil’s forestry service.

Brazilian officials say projects like the cocoa co-op are helping residents make a living from the land while moving away from deforestation.

“These cocoa projects come from the community, we are a partner with them,” said Abilio Ikeziri, an official at Brazil’s environment ministry, responsible for protected areas.

The income also helps locals keep the ranchers and land scammers out of the reserve, Ikeziri said.

“I am the only (official) responsible for looking after 1.5 million hectares (15,000 km sq) of land – it is impossible (without local help),” he told.

Communities living in the reserve and making a living from sustainably harvesting plants like cocoa that grow naturally makes it easier for over-stretched officials to defend the land from speculators, the official said.

In the Arapixi reserve, residents used to harvest cocoa for their own consumption and began selling it to a cooperative 10 years ago.

Last year they exported more than 10 tons of natural cocoa to Europe which earned the co-op about 130,000 reais (US$ 39,000), a decline from previous years due to poor weather.

Once it arrives in Germany the cocoa is refined into high-end, environmentally certified chocolate.

Based in the Amazon river port of Boca do Acre the co-op employs more than 400 people, including a dozen in Dona Oliveira’s community, said manager Jose Geraldo Tranin.

“Before we launched the co-op, many people were deforesting land for cattle,” Tranin told the Thomson Reuters Foundation in the co-op’s sparse one room office in Boca do Acre. “Now people know cocoa will generate some income so they are preserving the forest.”

With help from German social entrepreneurs who provided money to buy boats and other capital for the co-operative to get started, reserve residents like Oliveira were given training in cocoa production and tools to better harvest and transport the crop.

“The co-op wants to expand, so that is good for us,” said 52-year-old farmer José Freitas, taking a break from racking cocoa beans over a metal grate in the sun.

Residents can earn up to 1,200 reais (US$ 365) per month in the busy season preparing the beans for export – a decent salary in a region beset by poverty – although it means working seven days per week.

“We can buy more food now,” Freitas said. “I could even afford to make the trip to the hospital.”

For European consumers, their chocolate is branded as “wild cocoa of Amazonas”.

The project has had a clear impact on forest preservation in Arapixi compared to similar Amazon reserves, said Francidalva Oliveira de Souza, a researcher at the State University of Amazonas studying the project.

“Deforestation has been decreasing in this reserve,” Souza told in a phone interview.

“This sort of project could be expanded to help preserve other areas and help residents earn an income.”

Can’t Maintain Order? In Brazil They Call the Army

Brazil’s military is getting a serious workout these days. The authorities have recently deployed ...

Brazil Is in a Shambles. Can the New President Save the Crumbling Economy?

Now that impeached Brazilian President Dilma Rousseff is out of office, it is up ...

From Friends to Foes. The Split Between Temer and Lula Is a Mirror of Brazil

In the film Jerry McGuire, Tom Cruise exhorts, “Show me the money.” In Brazil, ...

Vilela: A Brazilian Family Synonymous with Terror in the Amazon

Every month, a group of wealthy women representing some of Brazil’s most exclusive and ...

The biggest economic question facing Brazil, as for most developing countries, is when it ...