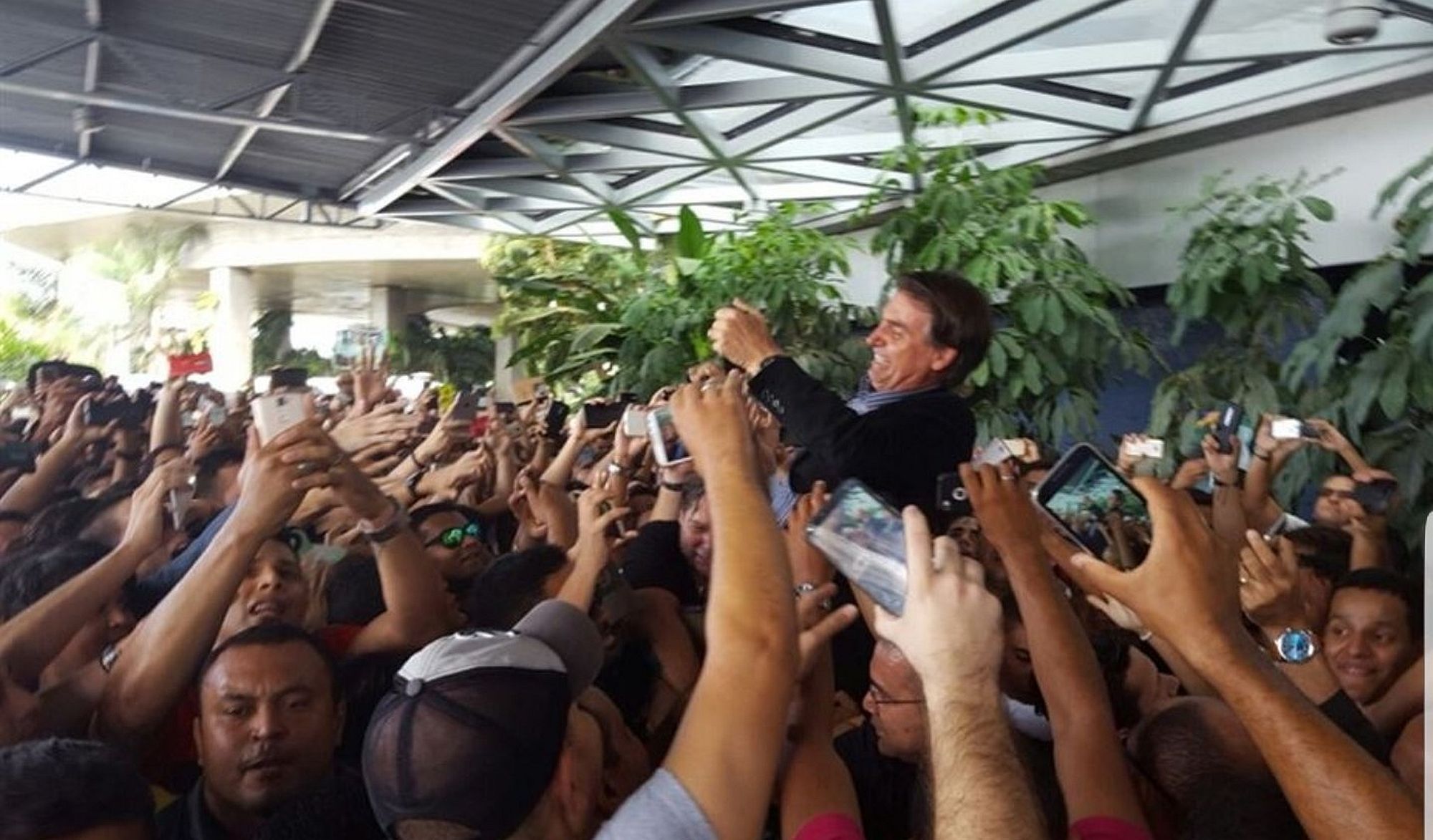 Jair Messias Bolsonaro, a far-right candidate and congressman, has launched an improbable campaign to win Brazil’s presidency. He served in the military under the dictatorship and has hounded left-wing lawmakers since.

Hundreds of fans were waiting in the arrival area of the airport, most of them young or middle-aged men, chanting “mito, mito” — “myth, myth,” in reference to Jair Messias Bolsonaro.

Wearing black plastic sunglasses and a green-and-yellow (the colors of Brazil’s flag) presidential sash that read “Bolsonaro 2018,” the candidate grinned as his supporters carried him on their shoulders through the airport.

These people, at least, take Bolsonaro’s presidential ambitions seriously. For years, the political establishment had dismissed the 63-year-old former paratrooper as a clown.

In Congress since 1991, he has been a typical backbencher for the far-right Social Liberal Party, grabbing attention with profane outbursts and verbal abuse, but never otherwise standing out for his speeches or legislative initiatives.

He once told a lawmaker for the Workers’ Party (PT) that she was “so ugly that she doesn’t even deserve to be raped.” He also likes to attack homosexuals, saying he’d rather have a dead son than a gay son.

When voting to remove President Dilma Rousseff from office in 2016, Bolsonaro publicly praised Colonel Carlos Alberto Brilhante Ustra, who tortured about 40 opposition members to death during the 1964-85 military dictatorship. Bolsonaro himself served in the army from 1971 to 1988. Rousseff, on the other hand, was tortured by the dictatorship.

As a lawmaker, Bolsonaro had long made Lula’s arrest his primary issue. Now, the former president is behind bars, locked up since April, when he was convicted of corruption and money laundering. Although he tops the opinion polls, Lula will probably not be allowed to run.

This puts Bolsonaro ahead, with about 20 percent. He does not yet face competition from within Brazil’s right-wing camp, which is mired in a swamp of corruption that Bolsonaro, as a lowly legislator, managed to escape.

Bolsonaro has hardly offered a concrete idea for solving Brazil’s problems. He is clueless about the economy, he says, and tells people to turn to Paulo Guedes, Bolsonaro’s desired economy minister, a liberal economist known as “Chicago Boy” for his affinity for deregulation.

Bolsonaro wants to place the public schools under the control of the military, and he says he would counter rising violence by arming the “good citizens” while promising police officers bonuses for every criminal killed.

Currently on his third marriage, he favors traditional family values. His three sons are professional politicians like their father, and they have all made a fortune on lawmakers’ salaries, but he wants to clean up the corrupt political establishment.

Those contradictions do not bother his fans, which is reminiscent of US President Donald Trump’s relationship with his own followers. Bolsonaro is, however, in some ways meeker. When asked about his racist, homophobic and misogynistic remarks, he has a tendency to backpedal. It’s all just a “joke,” a misunderstanding, he says innocently.

Bolsonaro’s critics believe that he learned everything he needed to know from comic books. Recently, he said Africans themselves had carried out the trade that brought millions of enslaved people to Brazil, not the Portuguese.

“We’ve inherited inertia from the indigenous culture, while the trickery comes from Africans,” Mourão said, to protests from rights groups and cheers from Bolsonaro’s supporters on social media. The campaign against “political correctness” is a success and the establishment’s criticism is the ultimate culmination.

Brazilians don’t like radicals, pundits say, so Bolsonaro won’t win. They predict that, without campaign money and TV spots, he is bound to lose out to the big parties.

But the business community has already signaled its approval of Guedes’ stated plans to privatize and streamline the state should he be nominated economy minister.

One should not underestimate Bolsonaro or hope that, in the worst case, Congress would thwart him should he be elected. Bolsonaro can count on the support of the agribusiness, the arms lobby and the ultrareligious.

The factions of Brazil’s BBB coalition — bois (bulls), balas (bullets) and the Bíblia (Bible) — were already significantly involved in ending Rousseff’s presidency. It is almost impossible to govern against them. But, with their support, even a backbencher could come to prominence.

Izaura Demari draws so much attention wherever she goes that some have even asked: ...

Can Brazilians from the Poor Northeast Prevent Favorite Bolsonaro from Becoming President?

As was widely predicted, Jair Bolsonaro, the far-right candidate of the Social Liberal Party, ...

Brazil President Falls to an Improbable Low in Popularity: 2%

Just when it seems impossible for Brazilian President Michel Temer’s approval rating to get ...

The Noose Is Tightening for Brazil’s Workers Party

Brazilians Special Kind of Blindness: They Can’t See They Are Racist

University of Arizona anthropologist Jennifer Roth-Gordon spent 10 days in Brazil leading up to ...

There’s Something About the State that Brazilian Neoliberals Hate

At the same moment that the lower chamber of the Brazilian congress was moving ...

Brazil’s President Knows She Lost. And Already Started Moving Out of Brasília