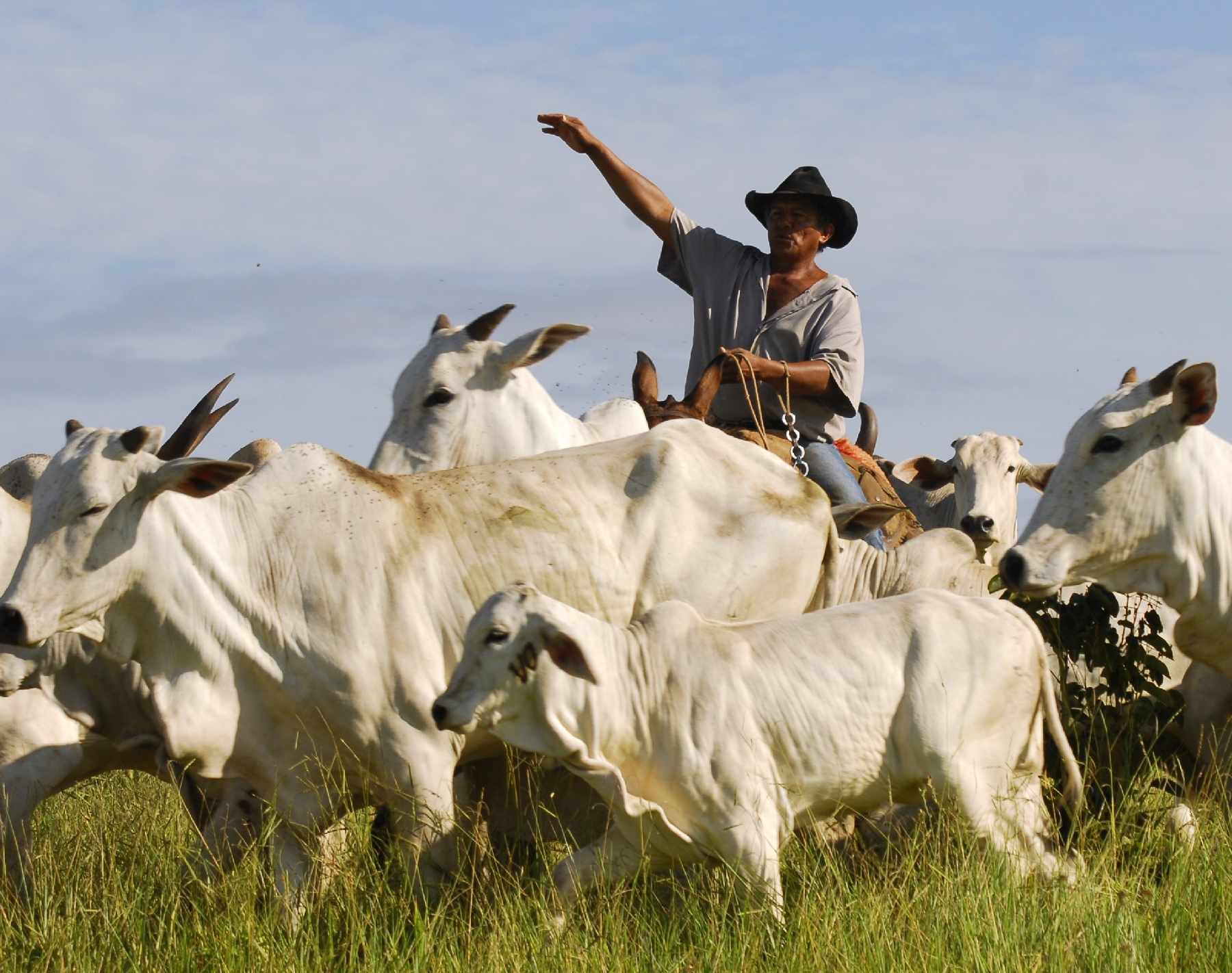 In almost every aisle of the grocery store, you can find products from the palm oil, soy, wood, and cattle industries. Together, these industries are responsible for more than a third of tropical deforestation annually, according to the non-profit organization Forest Trends.

While strides have been made by all four industries toward establishing deforestation-free commodity supply chains, the cattle industry has lagged behind the others.

In a 2016 survey of more than 550 major companies with ties to these commodities, Forest Trends found that 61 percent of companies active in palm oil made commitments to cleaning up their chains, compared to only 15 percent of those active in the cattle industry. Yet cattle products are responsible for at least ten percent more deforestation than palm.

Beef cattle are the largest commodity driver of deforestation globally, according to the think tank Global Canopy Program (GCP) in its report “Sleeping Giants of Deforestation,” released in December 2016. GCP also highlighted the cattle industry’s inertia compared with other forest-linked industries.

According to the report, the cattle industry remains the largest commodity driver of deforestation, but only about a quarter of companies that operate within the cattle product supply chain have policies in place regarding environmental impacts.

The Union of Concerned Scientists has also pointed to the massive deforestation caused by cattle beef – more than twice as much as the other major industries of soybeans, palm oil, and wood products.

According to some NGOs and industry players, this inertia may be connected to the complexity of cattle supply chains, low consumer demand for deforestation-free cattle products, and a lack of industry unity.

JBS runs the world’s largest slaughterhouse and meat processing operation and is one of Brazil’s biggest beef producers. The company employs more than 230,000 people globally, according to their website.

It buys cattle daily so that they’re fresh for the slaughter, choosing from a pool of about 70,000 suppliers, according to the company. Of those, 40,000 are in the Amazon. There’s a difficulty, however, in that parts of the region are connected to cattle industry-linked deforestation.

Marcio Nappo, sustainability director of Brazilian beef processor JBS, explains that this is partially tied to the complexities of the cattle supply chain. In the daily shuffle of searching for cattle suppliers, slaughterhouses can lose control.

“I cannot control my raw materials; it is a pure commodity market, driven by price,” Nappo said. “I don’t have any idea who will be my supplier tomorrow.”

JBS is part of the Cattle Agreement, which several major producers signed on to about seven years ago as a part of a pledge to be deforestation-free. But according to Nappo, constant uncertainty in supply chain factors make effective monitoring difficult. An assessment in 2015 of actors in the agreement found that JBS had made “substantial changes” to its procurement criteria.

Simon Hall, tropical forest and agriculture program manager for the nonprofit National Wildlife Federation (NWF), agrees that this daily shuffle is a particular obstacle to the cattle industry. According to Hall, soy, paper, and palm oil companies have greater control and stability in terms of suppliers.

For example, whereas soy processors often have long-term contractual relationships with farmers, the cattle industry operates largely through one-off transactions. It can be more difficult to get buy-in from producers and change practices on the ground when there aren’t strong supply chain relationships, he said.

Soy, palm, or timber crops also take several months or years to grow in a stationary lot, making them a little simpler to track, but cattle frequently changes hands. That makes it harder to track its source and ensure that it is deforestation-free.

“The field of soy isn’t going to up and move to the municipality next door, but cattle move around and can be transferred to different areas,” Hall said.

He added that an animal is often sold for slaughter when it’s about 40 months old, yet it may have only spent the last three or four months of its life at the ranch from which the slaughterhouse bought it.

According to Carlos Saviani, WWF’s vice president of sustainable food, such transfers can be numerous.

“One animal… before it reaches a slaughterhouse can pass through 10 different properties,” Saviani said. “It could be born in one farm, weaned in another farm, it could be raised until a year and half in another farm, and then it could go to auction and be sold to a feedlot. You have people that buy cattle and aggregate cattle from smaller producers into a larger farm.”

Efforts by companies like JBS to monitor their suppliers for deforestation often only extend to direct suppliers. JBS uses satellite imagery and other geospatial tracking technologies to check up on its direct suppliers daily to make sure no new land has been cleared, according to the company.

But it cannot ensure that the several different properties the cattle passed through – via indirect suppliers – have not contributed to deforestation.

Though Saviani praises the work of JBS and other companies that have invested in monitoring their direct suppliers, he said that indirect suppliers may still be responsible for much deforestation. He also said that more comprehensive tracking has been accomplished in other regions, like Uruguay and North America. But it is not yet industry-wide.

For example, in Uruguay, each animal is tagged with an individual chip that records every move it has made from birth to slaughterhouse. This chip links into a government-run database.

NWF’s Hall notes that he is working with other NGOs and cattle industry players in Brazil to improve tracking. That includes a data tracking system currently in place nationwide to track vaccinations for hoof and mouth disease. It doesn’t track individual animals, but rather batches of animals, so it isn’t as comprehensive as the system in Uruguay.

The goal is to integrate deforestation information into this vaccination tracking system. It will still take some work to figure out the technical details, but Hall is hopeful that this will soon allow companies to track the movement of cattle from birth to slaughter and to make sure each ranch the cattle passes through is deforestation-free.

Perception also plays a role in an aspect critical for accountability: public pressure. Forest Trends found in its survey of major companies with ties to forest-linked commodities that cattle companies had less fear of losing customers due to deforestation than the companies in other commodity industries.

It reported that 54 percent of timber and pulp companies fear backlash from customers if they support deforestation practices; 52 percent of palm companies expressed the same worry; 41 percent of soy companies; and 36 percent of cattle companies.

Retailers have put some pressure on slaughterhouses and ranchers to prevent deforestation. For example, Walmart and other major grocers in Brazil have committed in recent years to sourcing zero-deforestation beef.

Hall, from NWF, said that NGOs have also been working longer on raising awareness about deforestation in the paper industry than in the cattle industry. Cattle products are now receiving more attention in this regard, but it will take time for consumer awareness to catch up.

Neither the GRSB nor the various national roundtables on sustainable beef have started certifying products, though they have set some indicators and criteria to measure progress. The Forest Trends report noted that certification in other commodities, such as that provided by the RSPO, can help companies measure their progress and communicate it to consumers.

“Certification schemes provide a turnkey option toward sustainability that many companies are pursuing,” the report states.

The stand against deforestation is not an industry norm when it comes to cattle products, which makes it harder for individual cattle companies to compete when they commit to it, according to JBS’s Nappo. He said they have lost a lot of suppliers.

He added that in contrast, the entire soy industry in Brazil has collectively made a zero-deforestation commitment. The trade association does the monitoring, taking the burden off individual companies. Without similar industry support, JBS is left to provide not only its own monitoring but also its own support infrastructure to help its suppliers improve.

The Forest Trends report notes just that, stating that, “In spite of … criticisms [that certification criteria are sometimes inadequate], development of certification schemes may offer an opportunity for more companies with … cattle exposure to establish initial deforestation-related commitments and increase ambition over time.”

Tara MacIsaac is a freelance journalist and editor for Epoch Times. She is based in Canada and you can find her on Twitter at @TaraMacIsaac

Tired of Being Denied Territory, Amazon Peoples Are Drawing Their Own Maps

In 1707, a Jesuit missionary from the Czech Republic named Samuel Fritz published one ...

Brazil’s Left Is Proposing an Economy Based on Workers

cial and political movements in Brazil are organizing a “popular emergency plan” meant to ...

Brazils Says Environment Will Guide Its Next Budget

Brazil’s interim Minister of Environment, Claudio Langone, says that one of the biggest challenges ...

The Industrial Entrepreneur Confidence Index (ICEI-RS), measured by the Federation of Industries of the ...

Virtually all of the 169 recommendations made to Brazil by the UN Human Rights ...

Dilma Rousseff, the president of Brazil, has hinted that if re-elected next month, she ...