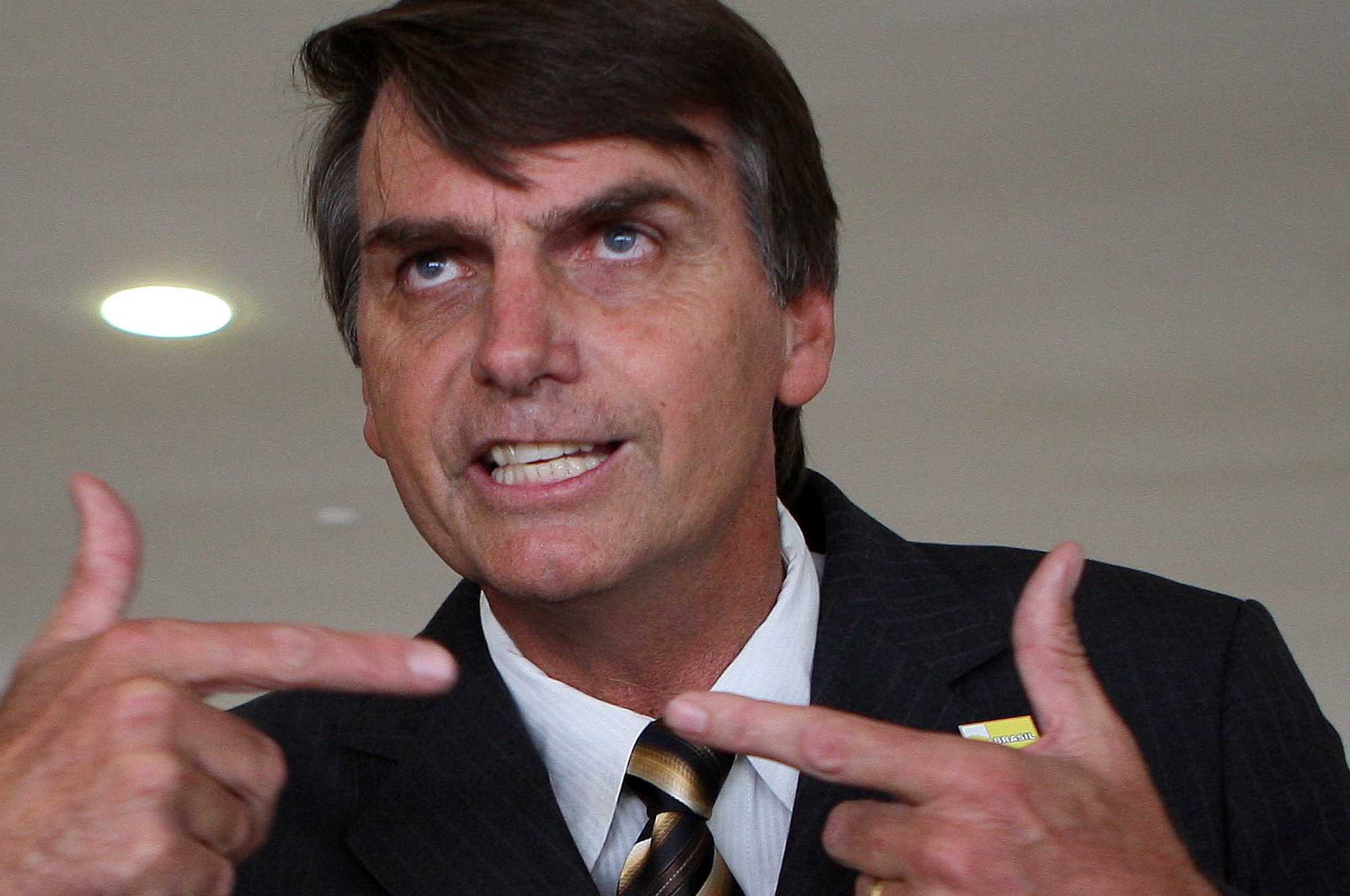 Federal Deputy Jair Bolsonaro October’s tour in the United States is an effort to promote his candidacy for Brazil’s presidency in next year’s elections as well as to gain international legitimacy and soften his harsh image before diverse audiences in four of the most important U.S. cities.[1]

The most recent opinion polls put him in a distant second place in the presidential race, only behind former Brazilian president Luiz Inácio Lula da Silva.[2]

Bolsonaro, a former military officer, is currently one, if not the most controversial and divisive figure in Brazilian modern politics. His U.S. agenda included private meetings with mostly investors and businessmen such as the Brazilian-American Chamber of Commerce, and a large public event at George Washington University’s Elliot School of International Affairs (GWU) in Washington, D.C. on October 13th.

GWU’s invitation, which is part of its Brazilian Political Leaders series, sparked a heated controversy on whether welcoming a politician with such reprehensible rhetoric would promote hate speech on academic campuses.

A group of academics, in Brazil and the U.S. issued an open letter warning that, by allowing Bolsonaro to speak on campus, GWU would be giving a platform to a “racist, sexist, homophobic right-wing extremist”, and urged the university to resign its invitation to the ultra-conservative congressman.[3]

Among the main reasons that the signatories listed to cancel the event were Bolsonaro’s support of the 21-year military dictatorship. In the past, Bolsonaro has called for a “political surgery to end corruption” that would involve closing congress while allowing the president to rule by decree.[4]

He recently declared that he would pull out of international human rights treaties, if he had the chance to do so as president.[5] They also listed his endorsement of the colonel responsible for Dilma Rousseff’s torture, Carlos Alberto Brilhante Ustra, who is one of the most despicable figures in Brazil’s recent history; as well as his virulent attacks on LGBTQI groups and activists, indigenous groups, Afro Brazilian communities and female activists.[6]

Of the episodes documented in the open letter, there is one involving PT (Partido dos Trabalhadores– Worker’s Party) congresswoman Maria do Rosário that perfectly illustrates Bolsonaro’s misogynist nature.

In 2014, following a congressional intervention in which Maria do Rosário praised a report by the country’s Truth Commission on the sexual and torture abuses by government forces during the 1964-1985 military dictatorship, Bolsonaro yelled: “I won’t rape you because you are not worth it”.[7]

In addition to being understood as a rape apology that suggests that some women actually deserve to be assaulted, this was the second time that Bolsonaro publicly insulted Maria do Rosário. The first time took place in 2003, when he called her vagabunda (slut) and mocked her when she started crying.[8]

Both episodes were videotaped and instead of apologizing, Bolsonaro has proudly shared those misanthropic clips on his social media accounts as a way to ridicule her even further.[9]

Bolsonaro’s behavior is particularly problematic as he clearly endorses gender violence in a country where 10 women are gang-raped every day.[10]

Bolsonaro’s hatred has been particularly targeted at LGBTQI groups. He has declared that a majority of Brazilians despise homosexuals. However, he has denied that homophobia exists in Brazil citing that around 90% of the murders of homosexual in Brazil are caused by drugs, prostitution or killed in domestic disputes.[11]

According to the federal deputy, he would rather have a dead son than a gay son, and has declared that homosexual children are the result of parents “not beating them up enough”.[12][13] Similar to gender-violence cases, Brazil has shown an alarming rate of homophobic crimes, since at least one LGBTQI person was killed every day in 2016.[14]

Likewise, he has promised that he will abolish indigenous reservations and suggested that landowners should have the right to bear arms to protect against landless peasants movements.[15] Regarding Afro Brazilians, he has declared that they “aren’t even good enough to procreate”.[16]

He also responded during an interview that none of his sons would ever date a black woman because they “were well educated” and had not been raised in “a promiscuous environment”.[17]

Once called “the most misogynistic, hateful elected official in the democratic world” Bolsonaro’s atrocious record of verbal and physical assaults shows that he is a politician that blatantly disrespects human rights.[18]

Providing a platform for figures such as Bolsonaro is dangerous because it serves to legitimize them as credible statesmen. The fact that he is second in the polls may serve as a reason for academic institutions to issue an invitation.

Nevertheless, one must take into account that what Bolsonaro stands for represents an important threat to Brazilian democracy as well as an attack on the liberties that minority groups in both Brazil and Latin America have struggled to achieve.

Although GWU maintained its intention to carry out the talk as planned, Bolsonaro’s team canceled the event one day before it was set to take place. In a blog post, the organizers of the event defended the decision to invite Bolsonaro as an opportunity to engage in “democratic debate” as well as to give platform to a diverse range of politicians.[19]

While it is true that welcoming diverse opinions must remain a top priority amongst academic institutions, labeling Bolsonaro only as a “controversial” figure serves to cover up the perils of his right-wing extremism. If GWU’s intention was to promote academic debate, the organizers should have had taken advantage of his U.S. tour and organize parallel events including other voices opposed to Bolsonaro’s hateful speech.

Additionally, throughout his entire career he has been reluctant to debate with anyone who has a different view, as his continuous provocations show. This was once again confirmed when his team of advisors canceled his participation, so that Bolsonaro could “comply with all his obligations” at private and more restricted events in New York.[20]

Unfortunately, the high level of polarization currently affecting Brazilian society opens the door for a hateful politician to take power in 2018. Bolsonaro’s support for torture and his defense of gender-based and sexual-orientation violence would only be detrimental to the numerous attacks against LGBT, women, Afro-Brazilian and indigenous groups that are already taking place in the country.

The opinions about giving a platform to radical politicians remain divisive. However, when it comes to hosting “controversial” foreign figures, it is important to analyze whether a talk can help legitimize a politician who attempts to shut down debate and is a threat to democracy in his own country.

[1] Eoin Higgings. “Brazil’s Donald Trump Is Coming to the U.S. in Search of Donors and International Legitimacy”. The Intercept. October 7, 2017. https://theintercept.com/2017/10/07/brazil-election-jair-bolsonaro-us-tour/

Maria Rodriguez-Dominguez is a research associate at the Council on Hemispheric Affairs (COHA) – www.coha.org. The organization is a think tank established in 1975 to discuss and promote inter-American relationship. Email: coha@coha.org

The Story of the Brigadeiro and Why I Brought This Brazilian Sweet Delicacy to the U.S.

If you think that brigadeiro is just a delicious dessert from Brazil, you’d better ...

On his first official trip after assuming Brazil’s Presidency, Michel Temer is in Shanghai, ...

Even as the overall population of Christians in the United States declines, evangelicals have ...

This past Friday (March 17) marked the third anniversary of Brazil’s biggest-ever corruption and ...

Brazil’s new government has announced a multibillion dollar privatization plan in an attempt to ...

Who Will Compete With Bolsonaro to Become Brazil’s Next President?

With Jair Bolsonaro certain to reach the second round of Brazil’s elections in October ...