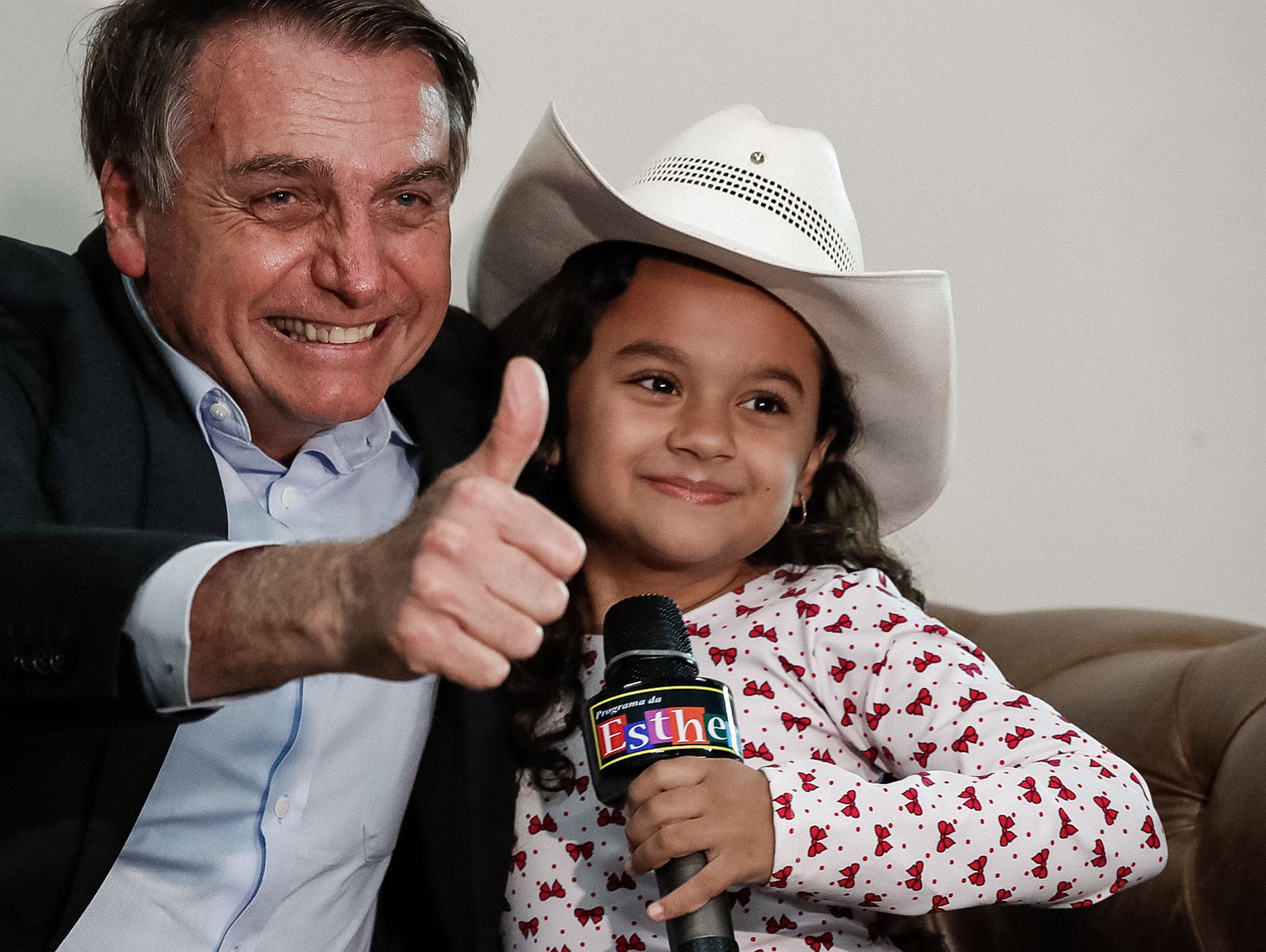 Brazilian President Jair Bolsonaro during an interview with kid reporter, Esther Castilho for the Esther and the Famous program. Photo: Alan Santos/PR

After just over 100 days in office, many Brazilians feel this right-wing former congressman has not delivered on that promise.

Bolsonaro’s approval rating, which began dropping immediately after he took office on January 1st, has declined from 49% in January to 34% in late March, according to the Brazilian Institute of Public Opinion and Statistics. That’s the lowest ever recorded for a Brazilian president at the 100-day mark.

Bolsonaro’s rise to lead Latin America’s biggest country after 13 years of leftist leadership was made possible by years of overlapping political, economic and crime crises that created widespread disillusionment across Brazil.

Capitalizing on voter frustrations, Bolsonaro, a longtime lower house representative, ran a polarizing outsider campaign, not unlike the 2016 presidential campaign of Donald Trump, now a close ally. He demonized women and minorities, attacked democratic institutions and, according to a Brazilian court, incited hate and violence.

Still, he won the presidency last October with 55% of the vote, an average share of votes which does not compare to the more than 60% share of former President Luiz Inácio Lula da Silva’s consecutive landslide victories in the 2002 and 2006 elections. In Brazil, voting is compulsory.

Many Brazilians expressed hope that, once in office, Bolsonaro would set the demagogy and bigotry aside to focus on addressing the huge challenges facing Brazil. These include a long-stagnant economy, rampant government corruption, and record-setting urban violence.

Hours after taking office, Bolsonaro issued an executive order that decreased environmental protections of the Amazon, outraging environmentalists worldwide and endangering the indigenous Brazilians who live in the world’s biggest rainforest.

On a recent visit to the Holocaust Museum in Israel, Bolsonaro made headlines for claiming that Germany’s Nazi Party was a leftist regime. His foreign affairs minister only made things worse when he defended his boss’s comments by explaining that both Nazis and socialists are “anti-capitalist, anti-religion, collectivist [and] against individual freedom.”

Bolsonaro has demonstrated a lack of mastery of the legislative process, despite having been a lawmaker for nearly three decades.

Reforming Brazil’s expensive, ailing pension system was one of Bolsonaro’s main electoral promises to boost the economy. But his mismanagement of negotiations around a bill to save Brazil US$ 270 billion over the next 10 years by raising the retirement age and increasing individual contributions has frustrated the fragile, cross-party coalition of lawmakers working to pass his plan.

Bolsonaro has picked fights with supporters of the bill, including the speaker of the lower house. And he has failed to explain critical aspects of the proposed reform.

Pension reform, which requires three-fifths congressional support to pass, now seems unlikely to happen before the June deadline Bolsonaro set – if it happens at all.

And Bolsonaro recently raised eyebrows by suggesting that he’d like to appoint his son Carlos, a far-right Rio de Janeiro city councilman who manages the president’s Twitter feed, to join his cabinet. All three of the president’s sons play an unusually active role in their father’s government.

Bolsonaro’s frequent positive references to military dictatorship as a form of governance also has critics worried.

Protests erupted in early April after Bolsonaro called on Brazilians to honor the anniversary of the 1964 coup that ushered in military rule in Brazil. Brazil’s 24-year military dictatorship claimed 191 lives, “disappeared” 210 dissidents and tortured several thousand people, according to a 2014 government report.

“Liberty and democracy only exist when the armed forces want them to,” Bolsonaro has since commented.

Bolsonaro served in Brazil’s armed forces. His vice president, Hamilton Mourão, is a retired general. And eight out of the 22 ministers in Bolsonaro’s cabinet are military officers.

That’s a higher proportion of military men in government than any prior democratic administration in Brazil – higher even than some of its authoritarian regimes.

Some of Bolsonaro’s civilian cabinet ministers are equally controversial.

Damares Alves, the evangelical pastor picked to lead Brazil’s Ministry of Women, Family and Human Rights, has made it her mission to promote “family values,” which entails promoting traditional values and combating abortion as well as gender equality.

“It’s a new era in Brazil: Boys wear blue and girls wear pink!” she announced on her first day in office.

Historically, the human rights ministry has worked to improve the lives of minorities in Brazil and ensure their legal protection.

And Bolsonaro’s first minister of education, Ricardo Vélez Rodríguez – who has since been fired for mismanagement – outraged teachers when he ordered all public schools to submit to the ministry a video of schoolchildren singing the national anthem on the first day of the new school year.

His demand may also have been illegal, since Brazilian law prohibits the recording of minors without parental consent.

Bolsonaro was elected to snap Brazil out of a deep slump. After three months in office, the “better future” he promised looks a lot like the crisis that came before.

Helder Ferreira do Vale is an associate professor at Graduate School of International and Area Studies, Hankuk University of Foreign Studies

“We believe that the Lula administration is in a good position to avoid what ...

“Election without Lula is fraud” is the manifesto being promoted by intellectuals and artists ...

The Brazilian Supreme Court will decide this Wednesday whether losing the appeal at the ...

Besieged by Cops and Gunmen a Brazilian Community Thrives

Natives of the Santa Catarina backwoods are instinctively reserved and mistrustful, but Luiz Backes ...

Washington’s regime change machinery has for the time being succeeded in removing an important ...

On the Brink of Chaos, Brazilians Go to the Polls. Will Winner Be Able to Govern?

Democracies are often rocked by wars and internal conflicts that brew up dissonance, clashes, ...

Call It Coup or Not, Stage Is Set for Brazil President’s Ouster

With the Rio Olympics over, Brazil’s attention returns to its long-running political drama as ...