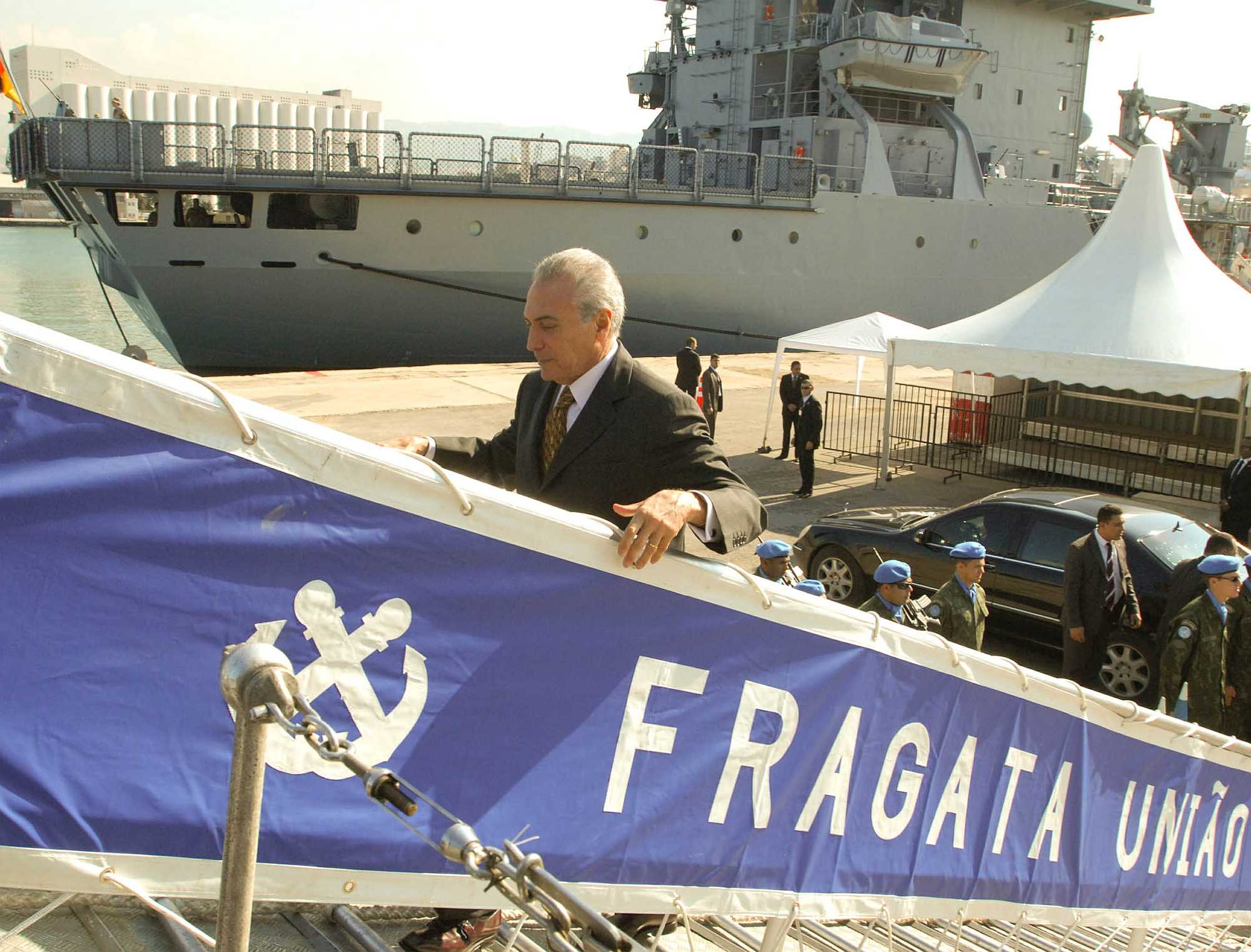 Michel Temer, then vice-president, at the arrival of União frigate in Lebanon

The Maritime Task Force (FTM, per its Portuguese acronym) of the United Nations Interim Force in Lebanon (UNIFIL) has been run by Brazil since 2011.

In an interview, Rear Adm. Brasil said that being in command of a transnational troop was one of the mission’s biggest challenges.

“It was important to take cultural, religious, and operational aspects into account. The way in which the navies behave is very similar, but there are differences that must be respected,” he explained.

Rear Adm. Brasil also noted that the mission enabled other troops stationed in Lebanon to be exposed to naval culture. “We had a total contingent of 11,000 service members in Lebanon, considering both ground and naval peacekeeping forces,” he said.

FTM-UNIFIL’s main objective is to prevent conflict between Israel and Lebanon. In addition, the maritime force patrols Lebanon’s territorial waters and the surrounding area.

“Our job is to keep weapons, munitions, and related supplies from coming in by sea,” he said.

According to Rear Adm. Brasil, the procedure involved closely monitoring ships as they came and went. “They were all detected, interrogated, and, if necessary, troops boarded and inspected those ships,” he explained.

UNIFIL also trains the Lebanese Armed Forces so that in the future they can take charge of their own country’s security.

“The peacekeeping mission is temporary in nature and aimed at providing support in a crisis situation, while the country prepares and strengthens itself,” Rear Adm. Brasil explained.

But, according to him, training, supplies, and funding are required to achieve autonomy for protection and defense. “This is tough in Lebanon. They still need the UN’s support,” he stated.

Preparation for the Mission

“I studied a lot to take command of FTM-UNIFIL. Over the five months prior to my deployment, I read every UN document related to this type of mission, and sought to understand the scenario and local culture,” Rear Adm. Brasil revealed.

He felt that understanding the geopolitical and religious customs and context facilitated his work at UNIFIL. “We also took part in training exercises in Brazil, based on the experience of those who had been on the mission.

“During the course, we saw the difficulties experienced by previous contingents, and they enabled us to develop a sense of the challenges that we were going to face,” he recalled.

He explained that the Brazilian Navy’s personnel had undergone two types of training: one for the crew, and another for the Joint Staff, who is in charge of running the mission.

“The crew’s training is very specific to the operational and tactical tasks that will be undertaken there. The Joint Staff’s training also included studying the culture and language,” he added.

According to information from the Brazilian Ministry of Defense, the Navy’s service members participated in internships at special facilities in Rio de Janeiro.

The training takes place at the Brazilian Navy Fleet Command, the unit in charge of planning the naval and aerial operations of the Brazilian squadron, at the Almirante Sylvio de Carmargo Instruction Center, which trains marines, and at Brazil’s Joint Peacekeeping Operations Center, a unit of the Brazilian Army which specializes in training service members, police, and civilians from Brazil and from other friendly nations for peacekeeping missions.

The ship is prepared with the assistance of the Almirante Marques de Leão Training Center, a unit also headquartered in Rio de Janeiro.

For Rear Adm. Brasil, it was an honor to have commanded FTM-UNIFIL for a year. “The mission gives us a sense of usefulness as service members. The personal and professional gains are fantastic,” he emphasized.

He added that it is important for Brazil to contribute to UN peacekeeping missions. “We understand the importance that this type of operation has for peace in the Middle East, something that ends up affecting everyone,” he said.

Since March 15, the frigate União, with nearly 250 service members, has been the flagship of FTM-UNIFIL. This is the 13th Brazilian contingent.

Rear Admiral Sergio Fernando de Amaral Chaves Junior, commander of the operation, is in charge of an FTM composed of seven ships belonging to Germany, Bangladesh (2), Greece, Indonesia, and Turkey, in addition to the Brazilian frigate.

According to Commander Ricardo Barillo Cruz, operations coordinator of the Operational Employment Section of the Deputy Office for Peacekeeping Operations, nearly 3,000 Brazilian service members have participated in the mission in Lebanon.

“Brazil’s involvement in UNIFIL is important for our service members’ preparation and readiness to be deployed in real conflict situations,” Cdr. Cruz noted, adding that being in command of the UN’s only maritime force in the world enhances the country’s standing on the international stage.

Brazilian Defense Minister Raul Jungmann said in a press conference that Brazil might expand its participation in UNIFIL after its troops leave Haiti in October. Taking on another mission, however, will depend on an invitation from the UN and approval from Brazil’s National Congress.

Adriana Erthal Abdenur, an expert on international relations, told the EFE News Agency that the obvious destination for Brazilian troops would be to reinforce UNIFIL.

“Brazil has been leading FTM since 2011,” she said. However, she noted that for Brazil to take on new duties in Lebanon, other countries would have to leave the mission, which is highly prized and strategic for many countries, including those in Europe.

According to Rear Adm. Brasil, it would be great for the country to expand its participation in UN peacekeeping missions. He emphasized that opting for Lebanon will require operating differently from methods used in the United Nations Stabilization Mission in Haiti.

“I have no doubt that we’re capable but the conflict in Lebanon requires specific training and a lot of preparation,” he noted.

UNIFIL was founded in 1978 during the Lebanese Civil War, which also involved Palestinians and Israelis. In 2006, the UN peacekeeping mission was bolstered by FTM after Israel invaded southern Lebanon to combat Hezbollah.

After being led by Germany, and by a European group consisting of Portugal, Spain, France, and Italy, FTM-UNIFIL came under Brazilian command in 2011.

Born to Fight Crime in the 1990s, Rio’s Militias Have Become Just Another Criminal Organization

In mid-May 2008, a journalist, a photographer and their driver were kidnapped and tortured ...

In Violent Brazil, Women Are Safer on the Street than at Home

In Brazil, every 15 seconds, a woman suffers violence in the home. Yet, Brazil ...

Brazilian Expats Longing for the Homeland Give Rise to 20,000 Businesses Abroad

Survey by Brazil’s Ministry of Foreign Affairs shows that there are near 20,000 micro ...

While Brazilians Represent 3% of the World Population, They Commit 10% of the Murders

In just three weeks in 2015, Brazil had more homicides than all of the ...

Somewhere between outraged and perplexed, Brazilians have been bombarded with news about their political ...

Brazil has now confirmed the purchase of British helicopter carrier HMS Ocean, according to ...

With FBI’s Help, Brazil Is Putting ISIS Terrorists Behind Bars

Eight Brazilians accused of promoting the Islamic State terrorist organization, as well as other ...

African-descendants in Brazil are 23.5 percent more likely to be killed than any other ...